Before there was RENT...there was La Bohème! 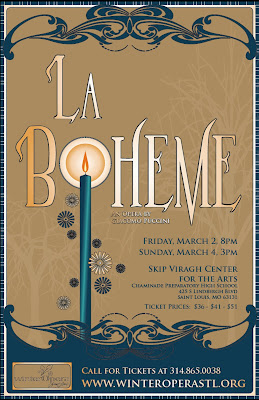 Winter Opera Saint Louis concludes its fifth season this March with a production of Giacomo Puccini’s timeless opera La Bohème to be performed on Friday, March 2nd at 8pm and Sunday, March 4th at 3pm at the Skip Viragh Center for the Arts at Chaminade (425 S. Lindbergh Blvd).

THE CREW
Conductor Alfred Savia of the Evansville Philharmonic Orchestra (Evansville, IN) makes his debut with Winter Opera Saint Louis. Stage Director Mark Freiman draws upon a long history with Bohème, beginning with an appearance in the opera as a child with Metropolitan Opera Children's Chorus. Freiman will also sing the roles of Benoît and Alcindoro. Nancy Mayo, adjunct professor of in piano and accompanying at Webster University and resident collaborative pianist with Winter Opera Saint Louis, serves as rehearsal pianist. Jennifer Krajicek, who has worked for several local theater companies including The Saint Louis Black Repertory, makes her company debut as Costume Designer. Scott Glascock, who most recently lit Winter Opera Saint Louis’ A Grand Night For Singing, serves as Lighting Designer. Scenic Artist Rachel Filbeck makes her debut with the company.

IN THE MEDIA
Gina Galati and Trevor Scheunemann appeared on St. Louis Public Radio's Cityscape program with Steve Potter to talk about the production. Click here to hear archived audio of the broadcast. Be sure to read Patricia Rice's overview of the season, including La Bohème, for The Saint Louis Beacon.

IF YOU GO...
La Bohème will be performed on Friday, March 2nd at 8pm and Sunday, March 4th at 3pm in the Skip Viragh Center for the Arts at Chaminade located at 425 S. Lindbergh Blvd (map). Production sung in Italian with projected English supertitles.

Get your tickets by calling Winter Opera Saint Louis at 314-865-0038 or going online at http://winteroperastl.tix.com/ For further information on the company, its future performances and special events, visit winteroperastl.org.
Posted by Phil Touchette at 8:20 AM No comments:

Dmitri Hvorostovsky as Don Carlo and Angela Meade as Elvira


Love, betrayal, duty and honour: A nobleman disguises himself as a bandit to prove his love for the beautiful Elvira. He conspires to overthrow a corrupt king, but at a huge cost. Soprano Angela Meade (Elvira) is the object of affection, love, lust and jealousy in Verdi's thrilling early opera Ernani. Tenor Marcello Giordani takes on the role of her fugitive lover, and all-star Verdians Dmitri Hvorostovsky and Ferruccio Furlanetto round out the cast as Don Carlo and Don de Silva, Ernani's rivals for Elvira's hand.

Cityscape airs on KWMU 90.7 FM at 11:00 a.m. to Noon on Friday, February 24th and will be repeated at 10:00 p.m. that evening. You may also listen to archived audio of the program on the St. Louis Public Radio website.
Posted by Tony Renner at 8:29 AM No comments: 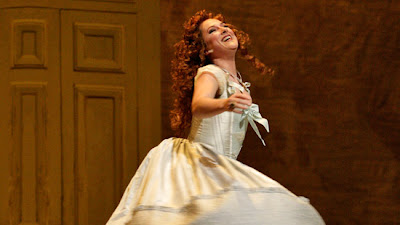 Posted by Tony Renner at 8:28 AM No comments: 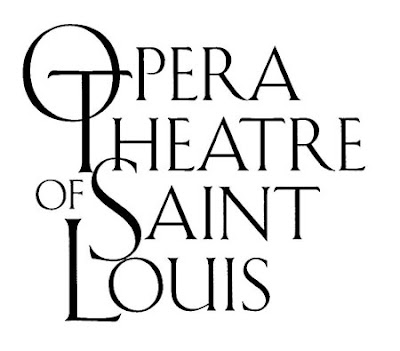 With the return of many St. Louis favorites and debuts by international stars, Opera Theatre of Saint Louis' 2012 casts are filled with fresh and exciting talent. The season begins with rising sensation Kendall Gladen in Bizet’s Carmen and continues with 2010 Metropolitan Opera National Council Auditions winner Rachel Willis-Sørensen making her company debut as Fiordiligi in Così fan tutte.

The 2012 season comes to a close with the return of Ashley Emerson as Alice in the American premiere of Alice in Wonderland, the captivating new opera by Unsuk Chin and David Henry Hwang.

Single tickets to the 2012 Festival Season start at $25 and go on sale Saturday, February 25.

After over a century, Carmen remains perhaps the world’s most popular opera. This all-new production evokes a sand-swept, lusty Seville. Carmen will be the first starring role at Opera Theatre for St. Louis’s own Kendall Gladen, whose blazing talent first emerged in Opera Theatre’s Monsanto Artists-in-Training program when she was only 16 years old.

Hailed in theaters and opera houses around the globe, this masterpiece of contemporary American music theater will be led by the powerhouse team of OTSL music director Stephen Lord and director Ron Daniels*.

Rod Gilfry*, whose opera credits include numerous roles at the Metropolitan Opera, makes his OTSL debut as Sweeney Todd. Gilfry last performed the role in Paris at the Théâtre du Châtèlet, drawing praise from the New York Times: “Gilfry sings magnificently as Todd and invests the character with an almost wholesome candor, that, through it all, keeps one mindful of the barber’s vulnerability.”

Unsuk Chin’s dazzling musical invention finds captivating new voices for familiar friends in an unforgettable journey down the rabbit hole. Ashley Emerson, who received glowing reviews for her 2011 performance as Marie in The Daughter of the Regiment, stars as Alice. “Armed with a bright smile... and a gift for physical comedy, Ms. Emerson was captivating,” wrote the New York Times. The production features Aubrey Allicock as the Mad Hatter, Matthew DiBattista as the Dormouse (both featured in 2011’s The Death of Klinghoffer), Tracy Dahl as the Cheshire Cat, and David Trudgen as the White Rabbit (both featured in 2010’s The Golden Ticket). Making a much anticipated debut as the Queen of Hearts is Julie Makerov*, with Bradley Smoak (2011’s Masetto in Don Giovanni) as the King of Hearts. Choreographer Seán Curran dances the role of the Caterpillar.

About Opera Theatre of Saint Louis

Opera Theatre of Saint Louis is one of the leading American festival opera companies, known for a spring season of inventive new productions, sung in English, featuring the finest American singers and accompanied by members of the St. Louis Symphony. As of 2011, Opera Theatre has presented 22 world premieres and 22 American premieres – which is perhaps the highest percentage of new work in the repertory of any U.S. company. Described by the Sunday Times of London as “one of the few American companies worth the transatlantic fare,” and by Opera Today as “the leading summer opera destination in the United States,” Opera Theatre of Saint Louis welcomed visitors from 45 states and 12 foreign countries in 2011. Although the size of the theater limits box office income to 26% of the budget, the company has consistently produced work of the highest quality while never accumulating a deficit.
Posted by Tony Renner at 2:45 AM No comments: 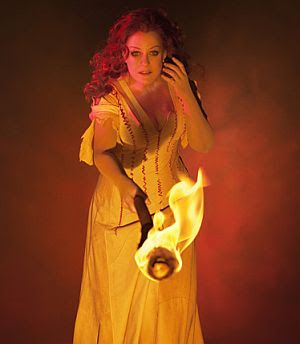 The New York Times reported on February 7, 2012 that


Deborah Voigt withdrew from the Tuesday evening performance of Wagner’s Götterdämmerung because of illness, the Metropolitan Opera said. Katarina Dalayman will take her place in the role of Brünnhilde.

Voigt is scheduled to perform on Saturday, February 11.


Götterdämmerung, the final installment in the Metropolitan Opera’s new production of Wagner’s Ring cycle, which opened on Friday, is the most theatrically effective staging of the four works in this epic series, and the clearest representation of the director Robert Lepage’s vision. That’s because with each installment Mr. Lepage has simplified the staging and used fewer of the capacities of Carl Fillion’s 45-ton set: the machine, as it has been called, a huge gizmo of 24 planks that rotate on an axle in combination with video projections to evoke rivers, cliffs, mountain passes, forest dwellings and more.

The old-fashioned imagery reveals how, at its core, Mr. Lepage’s Ring is quite a traditional production. Call it high-tech traditional. When summoned by Hagen, the vassals (the phenomenal men of the Met chorus) appear in woodsmen garb with spears and swords. Sentries are positioned atop the rafters to guard the hall. François St-Aubin’s costumes, if unremarkable, are handsomely realistic.

Instead of continually twisting into different contortions, as in earlier installments, the set remained stationary during extended scenes. On Friday this allowed you to focus on the exciting musical performance. Fabio Luisi has taken over the conducting of the Ring from James Levine, who continues to grapple with health problems and has withdrawn from all performances at the Met through next season. Mr. Luisi drew an uncommonly articulate and nuanced account of this daunting opera (a nearly six-hour evening with two intermissions) from the Met orchestra.

At his best in years past Mr. Levine revealed more mystery and awe in the score. But Mr. Luisi’s lucid, textured and urgent conducting was distinguished. He received a huge ovation.

The American tenor Jay Hunter Morris, who took over the title role in Siegfried on short notice in October, was again impressive here. He has found his own way to sing this heldentenor role with a lighter yet athletic and youthful sound. His clarion top notes project nicely over the orchestra. With his barrel chest and limberness, he inhabits the headstrong young Siegfried. When he stumbles upon the flirtatious Rhinemaidens in Act III, Mr. Morris waves an endearing hello, like a gawking adolescent saying, “Hi there, girls.”

The soprano Deborah Voigt received a rousing ovation for her Brünnhilde, and it is hard to imagine that she has ever been as gratified. In recent years she has gone through a rough period as a singer. Whether her vocal problems were precipitated by weight-reduction surgery in 2004, which she discussed openly the following year, is hard to say. But her voice has lost gleam, warmth and power. 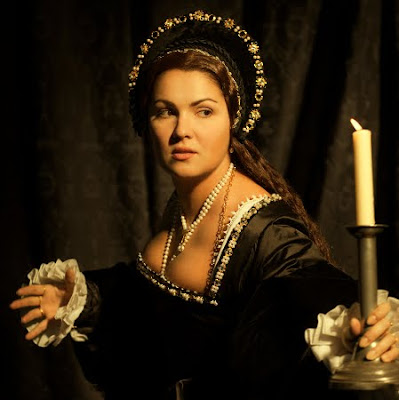 
Anna Netrebko opens the Met season with her portrayal of the ill-fated queen driven insane by her unfaithful king. She sings one of opera's greatest mad scenes in this Met premiere production by David McVicar. Ekaterina Gubanova is her rival, Jane Seymour, Ildar Abdrazakov sings Henry VIII, and Marco Armiliato conducts.


Since arriving at the Metropolitan Opera as general manager in 2006, Peter Gelb has been angling to make the soprano Anna Netrebko a house prima donna in the old-world sense: a first among equals. On Monday night Mr. Gelb must have felt that the plan was working.

To open the Met’s season, Ms. Netrebko sang the punishing title role of Donizetti’s Anna Bolena in the company’s first production of this breakthrough Donizetti work from 1830. The extended last scene was the high point of Ms. Netrebko’s performance as the distraught British queen (based on the historic Anne Boleyn, the second wife of Henry VIII). Having been falsely condemned for betraying her husband, Anna drifts in and out of sanity.

Ms. Netrebko sang an elegantly sad aria with lustrous warmth, aching vulnerability and floating high notes. When the audience broke into prolonged applause and bravos, Ms. Netrebko seemed to break character and smile a couple of times, though her look could have been taken as appropriate to the dramatic moment, since the delusional Anna is lost in reverie about happy days with her former lover.

Then, at the end of this “Mad Scene,” Anna, restored to horrific reality, curses the “wicked couple,” the king and his new queen, and stalks off to her execution, insisting implausibly that she is not seeking divine retribution but going to her grave with mercy on her lips. Ms. Netrebko dispatched Donizetti’s cabaletta, all fiery coloratura runs and vehement phrases, with a defiance that brought down the house.

Posted by Tony Renner at 4:39 PM No comments: