Monday night marked the first St. Louis Theater Circle Awards. The mission of the St. Louis Theater Circle is simple: To honor St. Louis professional theater. While various reviewers may also cover touring shows at The Fox and the Peabody Opera House as well as selected community and college productions, the Theater Circle Awards are designed to focus attention on dozens of area theater companies which showcase the artistic efforts of actors, directors and technical artists in the metropolitan area. Other cities around the country, such as Phoenix, San Diego, Boston, Chicago, Philadelphia and Washington D.C., honor their own local theatrical productions with similar awards programs.

Opera Theatre of St. Louis's production of Sondheim's Sweeney Todd picked up two awards in the Musical Theater category.  Stephen Lord was named Outstanding Music Director (a tie with F. Wade Russo for Sunday in the Park with George at The Rep) and Rod Gilfrey was named Outstanding Actor (also a tie, this time with Ron Bohmer of Sunday in the Park With George).  This was the first time an opera company has been named in a theater awards program.  I see it as a vindication of Opera Theatre's dedication to presenting opera as both a musical and theatrical form.

Congratulations to all of last night's honorees.  For a complete list, see my recent post on the Stage Left blog.

Chuck Lavazzi is the senior performing arts critic at 88.1 KDHX.
Posted by Chuck Lavazzi at 9:11 PM No comments:

Winter Opera has closed their current season with a musically splendid and visually satisfying production of Puccini’s 1900 political melodrama Tosca. Acting and some casting choices did not always strike me as ideal, but the company sang beautifully, the orchestra sounded solid, and the sets and costumes were, given the group’s small budget, quite lavish.

It was, in short, quite a feather in the cap of the organization I’m starting to regard as The Little Opera Company That Could.

Anyone who thinks that there's anything new about the phenomenon of public figures hiding their profane desires under a blanket of bogus piety needs to consider Tosca. The villain of the opera, Baron Scarpia, is a classic example of how morality and respect for order can become a false front for lust, violence, and falsehood. Scarpia also provides us one of the great moments of Italian opera in the final scene of Act I as he plots the seduction and betrayal of Tosca while the crowd celebrates High Mass. It's a spectacular scene, and one of the best examples of dramatic irony in operatic literature.

Winter Opera’s staging of that scene was an illustration of this production’s strengths. The stage was quickly and efficiently filled with members of the adult and children’s chorus, the 19-piece orchestra played its collective heart out, and the act came to an appropriately dramatic conclusion. There was even a genuine Catholic cleric (Msgr. Borcic) to play the Cardinal.

The principals in this production all had fine, strong voices that were solid throughout their ranges.

Baritone Nelson Martinez was a terrific Scarpia. He’s a physically large actor who made his size an integral part of his portrayal, emphasizing Scarpia’s boundless lust for physical pleasure. He was on solid textual ground there; Scarpia’s opening aria in Act II is nothing if not a glutton’s version of Iago’s “Credo” in Otello. When Tosca ventilates him with his own dinner knife at the end of that act, it’s one of the most satisfying bits of bloody justice in Italian opera.

Soprano Stella Zambalis got Tosca’s intensity and delivered a first-class “Visi d’arte,” but seemed to lack the strong sexual presence that would make Scarpia's obsession for her credible. It didn’t help that the lighting darkened her nasolabial folds, which made her look older than Tosca ought to be. This isn’t the first time I’ve noticed less than ideal lighting on that stage; it’s something Winter Opera might want to take a look at.

Tenor Alex Richardson was vocally an exceptional Cavaradossi. I didn’t find his acting quite as convincing, but when he and Ms. Zambalis were both soaring through their love scenes I found it easy to forgive any theatrical failings.

I was also impressed with Nathan Whitson’s Angelotti, Chloe Haynes’s charming offstage Act III Shepherd, and director Mark Freiman’s fussy Sacristan. The Sacristan’s character is the only bit of comic relief in the opera’s otherwise grim verismo mix of passion, deceit, and violence, so a strong performance here is always welcome.

Lighting issues aside, the technical aspects of Winter Opera’s Tosca were quite good. JC Krajicek’s costumes looked great and were appropriate for the characters. Scott Loebl’s sets were equally impressive; his Farnese Palace interior drew applause as soon as the curtain went up. Steven Jarvi, who has just been appointed Resident Conductor at the St. Louis Symphony, led the orchestra in a wonderfully disciplined reading of the score.

Winter Opera remains one of the better practitioners of musical theatre in St. Louis. They also have the distinction of being the only one of our three opera companies to be working in a space that wasn’t retrofitted to present opera—a virtue not to be taken lightly. It will be interesting to see them develop in the future.

Chuck Lavazzi is the senior performing arts critic for 88.1 KDHX, where this review originally appeared.
Posted by Chuck Lavazzi at 1:15 PM No comments: 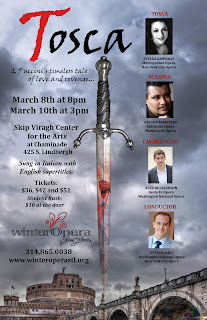 Scarpia, Rome’s feared chief of police savors the thought of seducing opera diva Floria Tosca, then murdering her rebel lover Mario Cavaradossi…as he listens to Mass. Will Tosca succumb to a fate worse than death to save her lover from a firing squad? The desperate heroine does what she must do in this Puccini classic with a score featuring the operatic gems “Recondita armonia,” “E lucevan le stelle” and “Vissi d’arte.”

Tosca opens tonight, Friday, March 8th (8pm) and continues Sunday, March 10th (3pm) at the Skip Viragh Center for the Arts at Chaminade College Preparatory School located at 425 S. Lindbergh Blvd. The production is sung in Italian with projected English supertitles. Tickets may be purchased by calling Winter Opera Saint Louis at 314-865-0038 or online at http://winteroperastl.tix.com/ $10 Student Rush Tickets sold at the door; valid student ID required. For further information on the company, its future performances and special events, visit winteroperastl.org.
Posted by Phil Touchette at 6:00 AM No comments: